The Power of Play as the Ultimate Reward.

The power of play as the ultimate reward can transform and catapult your training and get results faster.

I love using play in my training and have seen the results a lot faster due to the fact my dog has the drive to keep on keeping on and are super keen to start a training session.

How I use Toys as an Ultimate Reward.

One of the most rewarding things dogs can do is play. We know that a lot of dogs love playing so why not include this in your training for increased fun which can equal – greater success.

When using toy rewards, I want to create that same level of fun and enjoyment for my dog. When watching 2 dogs playing well together, with a toy or without a toy, there is always give and take. One dog will run, the other will chase. Then they may change directions and swap who’s chasing who, One of the dogs (#1), even though it may be faster and more agile than the other, might slow down and allow the other dog (#2) to “catch” him. This is the give and take around the game. If dog number 2 was not given a chance to catch him, then the fun would go out of the game pretty quickly. In saying that, there are dogs that will chase rabbits all of their lives and never catch one… I want to recreate this fun & drive of play in my reward system.

I can use anything from a plaited rag, a piece of leather, a ball, tug toy, a bite wedge or pillow. For me, I noticed that Zia (my 2 yr old Belgian Malinois) loves to chase something, so throwing a ball and having her chase it was the first thing I worked on. It is the thrill of chasing the ball that she thrives on. Remembering this, it also took a while before she would stay and remain interested in the game.

So my first bit of advice would be, keep these play sessions short. We know that when you want something and then it is taken away after a short period of time, you want it more. The Candy Crush game on your phone or tablet is a great example of this. If you have played it or any similar game, you  know that it’s addictive. You play until you lose all your lives, then you have to wait for a period of time before you can play again. Therein lies the secret to the game – scarcity. It works like this; Play the game and when you are really enjoying it, feeling challenged and are in control, the game will end as you run out of lives and now you have to wait for an hour before you can play again.

This is the mindset I want to create around toy play with my dog and what we teach in our classes. While you have the chance, play, be involved, enjoy it and then the game will finish, but you (the dog) will be eager to play the game at the very next opportunity, and want more.  I am sure you can all come up with ideas around this. Never ending packet of Tim Tams, coffee, favourite TV series, glass of wine etc

I also use 2 balls when playing this game, that way she never felt like she needed to covet or guard the ball or toy.

When Zia was younger and learning the game, she was happy to give the first ball up as she then got to chase the 2nd ball. I would also give her an opportunity to play a little bit of tug of war with the ball. This is the reason as to why we use and recommend our “Ball on rope” to encourage good play.

It allows you to have that bit of play with the rope when playing tug and assist in throwing the ball for your dog to chase. It also helps to teach the dog to hold it correctly as if I can flick / tug the ball out of her mouth, she then loses it for a little bit (as seen in candy crush). Next time, she may hold on to it with a  better, stronger, cleaner grip and have a feeling of success, which builds the fun when playing.

As Zia grew and started to gain an understanding of the game and to experience the fun it can be to play, I then started to use a tug toy with 2 handles. To start with, Zia would prefer the ball over the tug, this can be different for every dog, as fun is an individual preference. I learnt that if I threw the tug toy, that it created a little bit of a chase for her which is what she loves and then I would encourage her back to me and we would play a quick game of tug of war.

***Notice I say “I learnt”, that is because a reward is only deemed rewarding if the dog itself finds it rewarding. Sometimes we need to adjust our perception of play for our dog in order for our dogs to really get fun out of it.

There would be times in these initial stages that I would wiggle the toy 3 times and then let it go. This would keep her in a winning and powerful / confident mindset – and let’s face it, when we play that’s exactly how we like to feel too.  I use the analogy of playing piggy in the middle. If you had a 5 year old child in the middle and threw the ball over their head, never giving them even the slightest chance, the game would not last very long. They wouldn’t enjoy it as they didn’t feel like they had any chance to win. However, if we made the child miss and then they almost got it, and then on the next time they did, that gives the child the feeling of power and confidence. How good is that feeling! And that is how I want my dog to feel. There is always a chance.

For me,  I want the dog to be coming at the toy in a straight line (See pic) and for the toy to be presented at the dogs head height. Make the game easy to start with, and build strong foundations first. Think of it like teaching a young child to catch a ball. You start with a bigger softer ball being tossed gently towards them, where you carefully aim your pass to allow the kids greatest success before you move onto faster passes or competitive sport. 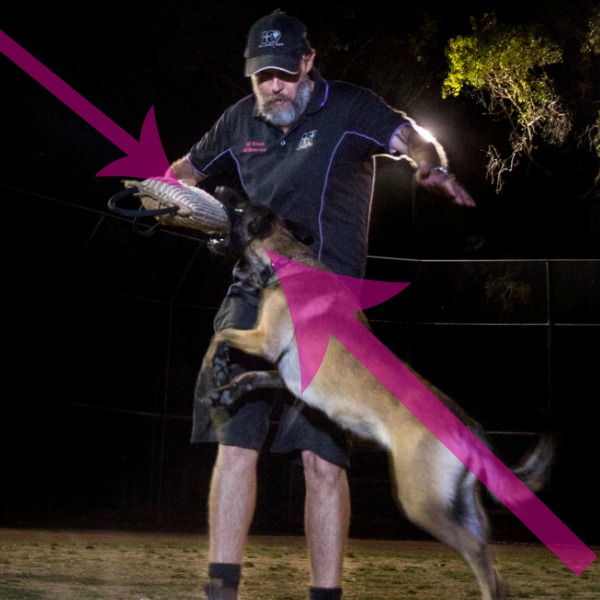 You can see Zia’s spine is in a direct straight line in order to get the toy in the most effective way.

Let the dog come in from around a meter away and then as the dog grabs the toy, move and give into the direction from which your the dog takes the toy so you aren’t jamming the dog’s neck. So you may step backwards if your dog grabs the toy from in front of you. I let my dog win the toy, as discussed above but encourage the dog to bring the toy back to me so the game can then continue. A game of tug of war is only fun if there are 2 participants.

This is the start of how I taught my dog to play tug. What works for one dog, doesn’t always work on another, however using these guidelines, you should be able to start to have some level of success in teaching your dog the fun of playing tug with you. Film your play sessions, watch them back and see how you can improve. Keep your sessions short, fun and light and then once the dog starts to enjoy the game, then ask for easy obedience positions like a sit and then reward with the toy.

2 thoughts on “The Power of Play as the Ultimate Reward.”